In the early 1960s, José Antonio Coderch was hired to reform the Real Club de Polo de Barcelona, where he ran Barcelona’s high society at the time. In that remodeling, José Antonio Coderch decided to design a fireplace that would remind us of the old farmhouses, where the fire was made in the floor, being the center of attention and meeting of the home. The POLO fireplace was born. The second chimney that DAE incorporates into its manufacture. A fireplace of large dimensions, marked by the structural verticality of the tube and its hood forming a compact element and which in turn is lightened by the suspension of the grill and the rest on the floor of the ash drawer. It is a fireplace that combines perfectly in both rustic and modern environments and with a multitude of applications, such as on a shelf, as a space divider…

As many professionals tell us, we like it because of its magnificent technical design, which facilitates perfect heat conduction and the exit of the smoke, and also the aesthetic design, which allows for a slight variation in the placement modes and distances from the floor.

After its great success, José Antonio Coderch decided to make the same fireplace but with smaller dimensions, so that it could cover a need in small rooms of the home. At that time, he was building the Casa Senillosa in Cadaques . This is the origin of the third model that DAE has added to its collection of fireplaces, the POLO P. 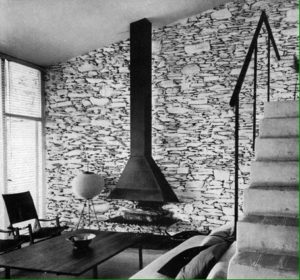 For that reason at the present time DAE commercializes the two models, denominated.

Its truncated-pyramid silhouette is a benchmark of mid-20th century Spanish design. A symbol of modernity, it represented an important technical innovation based on traditional homes.

Sorry, the comment form is closed at this time.