With it began the DAE collection.

In 1950, José Antonio Coderch, inspired by English fireplaces, decided to create a fireplace in the house he shared with Leopoldo Milá in Cadaques. 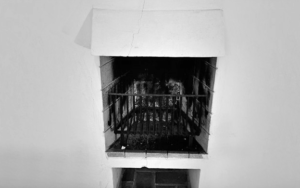 Once it was made with building materials and knowing that the person who could help him to make a first metal prototype, due to his experience, was precisely Leopoldo Milá who at that time was dedicated to making exhaust pipes for the companies Ossa and Montesa. One night, sitting in front of the fireplace, José Antonio Coderch took out some sketches made by hand and showed them to Leopoldo, asking him: “Do you think you can make this fireplace in steel plate?” To which Leopoldo Milá replied: “Of course.

At that time I think they were not aware of what that fireplace would mean. It was the first metal fireplace manufactured in Spain, in 1964 it was awarded a gold delta and today it is still a modern design fireplace, let’s call it a timeless design. 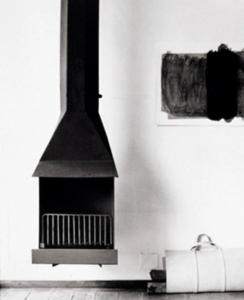 The CAPILLA fireplace has been with us for 70 years and its demand continues to rise. There are several things to note about it, surprisingly it is a small fireplace, this allows you to install it in any space regardless of whether it is a small or large room because of its reduced measures, another very important fact is the great performance. On the other hand, with the dedication of José Antonio Coderch and the hands of Leopoldo Milá, not only did they achieve a fireplace where you can contemplate the fire, but they also studied perfectly the correct exit of smoke from the chimney and something very important, that the body of the fireplace acts as a sounding board, enhancing the sound of the crackling of the wood when it burns. Who has never thought of staying by the fire alone or in company listening to that magical sound?

We can really say that the CAPILLA fireplace is a fully functional fireplace in winter and a sculpture in summer.

Sorry, the comment form is closed at this time.